After leaving Bilbao, the Way of St. James passes through urban and industrial landscapes. In this stage you can see the growth and evolution experienced by this area of ​​Bizkaia since the late nineteenth century. However, we will also encounter some nature along this stage, such as Mount Cobetas (or Kobetamendi), the Cadaguariver or the small forest that crosses the medieval road of Santa Águeda.

Km. 0 Bilbao. The Way of St. James crosses Bilbao from its Casco Viejo, where we will observe the traces of the history of this Villa, up to Mount Cobetas with its panoramic views.

We start from the Santiago cathedral in Bilbao’s historic quarters, going down Tendería Street until reaching the Nervión River. We cross the famous San Antón Bridge passing the Church of San Antón, which deserves a close look, since it is older than the Villa de Bilbao itself. After walking past Bilbao La Vieja, through San Francisco Street to Zabalburu Square, we continue along Autonomía Street for more than a kilometre to leave Bilbao on the Basurto-Kastrexana road towards Mount Cobetas (Kobetamendi). The hour walk out of the big city is rewarded by the views that we can enjoy from this mountain, with panoramic views over Bilbao and over the Nervión valley to the Cantabrian Sea.

After passing the hostel in the Altamira neighborhood, turn left and then take a stone path that goes down on the right. We descend the mountain on several paths until reaching the Kastrexananeighborhood. We continue downhill, after passing under a small tunnel, until the Bilbao-Balmaseda road where we turn to the left and take the turn towards Las Delicias. We will meet the Kadagua River (natural border between Bilbao and Barakaldo), and we will cross it over “Devil’s bridge”.

Km. 6.5 Las Delicias (Barakaldo). Pay close attention here because, just after reaching this neighborhood of Barakaldo, we find the detour that goes to Balmaseda to later head towards Burgos following the French Way; this is not the way we must follow, we ignore it and continue along the Coastal Route. To do this, right after crossing the tracks continue along the paved road to Santa Águeda until we meet the medieval path that crosses the forest which takes us to the Santa Águeda hermitage This medieval path was a “Camino Real” or “Royal Path” and also the commercial route used by merchants to go to Castile.

Next to the hermitage the pilgrims will find a fountain, a good place to stop on the way and rest.

The descent begins, towards the neighborhood of Cruces (Barakaldo), we leave the water tanks on the left and continue down to the first houses of Cruces. At the entrance roundabout we turn left towards the football field and then towards the Gorostiza sports centre, next to which we will find Tellaetxepark.

Km. 12.4 Tellaetxe. After the park, we continue along the sidewalk on the right to the Retuertoneighborhood. We pass under the N-634 road and then, after the church of the Sacred Heart and at the end of a narrow street, we continue to the right along Euskadi Avenue and pass under the motorway. At the roundabout we continue on the left hand side next to the restaurant Kokoxily and take Ribera avenue in the direction of Megapark of Barakaldo, an extensive and busy commercial park, that we will cross following a pedestrian and bike lane,  at the end of Megapark go down to the left to the edge of the Galindo river, where a Way of St. James sign indicates the distances to our following destinations: Sestao and Portugalete.But, to get to them, we must first continue strolling along the right bank of the Galindo river until we cross it near the Lasesarre sports centre.

Km. 17.8 Sestao. Once we have crossed the river, we pass under the railroad tracks and turn left to cross the degraded area of Simondrogas. We cross Sestao up the Gran Vía to the town hall, where we turn right down the Aizpuru street. Almost without realizing we go from Sestao to Portugalete and we are walking towards the mouth of the Nervión in the direction of the streets Chávarri and Sotera de la Mier, which will take us directly to the Basilica of Santa María de Portugalete

Km. 19, Portugalete. After a stop to admire the Basilica of Santa María, we find the Viewpoint of the Church of Portugalete’s gardens right next to it,with wonderful panoramic views over the Nervión Estuary, the promenade and the famous “suspension bridge”.

Bilbao: The San Antón Bridge (the oldest in the Villa) next to the Church of San Antón. Here we can learn the history of Bilbao, while its image has become a symbol of the city.

The Bizkaia Bridge Declared World Heritage by Unesco: This famous bridge that connects Portugalete and Getxo on both banks of the Nervión Estuary, is another essential image to contemplate in Bizkaia. Also known as the “bridge “It was the first toll transporter bridge in the world, inaugurated in 1893 and built by the Bizkaian engineer Alberto Palacio and Elissague (disciple of the creator of the Eiffel Tower).

Portugalete: It is worth walking through this noble village and strolling through its Old Town, declared a monumental complex, enter its bars and restaurants to taste the “pintxos” and the local Basque cuisine, or appreciate the beauty and history of buildings such as the Salazar tower house or the Santa Maria Basilica.

Also in Portugalete you can visit the Rialia Museum of Industry, to learn about the recent past of this part of ​​Bizkaia. 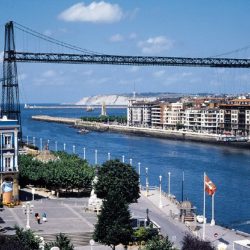