Throughout this stage, we say goodbye to the towns and landscapes of Rural Bizkaia, and enter into industrial landscapes, reaching the big city: Bilbao, an example of urban transformation.

Km. 0 Gernika. We start this stage visiting Gernika’s biggest attractions. From Plaza Foru, where the town hall of the Villa is located, we go up to the gothic church of Santa María: One of the best examples of Gothic architecture in the Basque Country. From there we go through Santa Klara until the Gernika Council Building, the meeting place of the towns of Bizkaia, and the Tree of Gernika, under which the Lord of Biscay was sworn in and which currently hosts the acts of taking possession of the offices of “Lehendakari” or the Governor of Bizkaia.

We leave the Casa de Juntas aside, passing under an arch; we walk past the Allende Salazar School and turn left. We follow the road forward, through the streets Zearreta and Mestikabaso, then turn right and find, in the Zallo neighborhood, the hermitage of Santa Lucía.

Km. 2 Hermitage of Santa Lucia. This part of the stage invites us to enjoy the flora while we ascend to Bilikario on a forest path.

From the hermitage we follow the paved path and pass the stream to begin the ascent to Mount Bilikario. We must remain vigilant to follow the signposted turn towards Gerekiz. We then descend to the rural neighborhood of Pozueta (Km 5.6) in Muxika, contemplating the typical Basque farmhouses.

From Pozueta we continue along an asphalted stretch and we pass the BI-2121 road through an underground passage, after which we follow the road towards Eskerika to the Gerekiz peak and the hermitage of San Esteban de Gerekiz. In this stagethe Way of St. James coincides in a stretch with the “Camino Real” or “rutajuradera”: The route that the old gentlemen of Bizkaia took to swear into the Fueros.

We continue to the Landotz farmhouse, where we will find a sample of the culture and hobbies of the Vizcayan people: A “fronton” or handball court. From here the pilgrims who make their way on foot can take a forest track that goes to the right and that after descending and ascending again takes us to the road, which we will follow on the right under the eucalyptus trees up to the Pepiena farmhouse, which we walk around to continue to Eskerika (Km 10).

Km. 10 Eskerika. The tracks will lead us inevitably towards the BI-2713 road and we will walk along the shoulder towards Goikoelexalde and Larrabetzu.

Km. 15 – 18 Goikoelexalde and Larrabetzu. Upon arrival in Larrabetzu we will find the church of San Emeterio and San Celedonio, which has one of the most important Spanish-Flemish altarpieces in Bizkaia and where the pilgrims can contemplate its Gothic mural paintings. A good place to rest before heading down the sidewalk to the medieval village of Larrabetzu. After leaving the municipality, we continue along the shoulder, taking the detour to the right to follow the road that goes to Lezama.

Km. 20 Lezama. We then cross the centre of Lezama, continuing straight ahead, crossing the last rural neighbourhoods before entering the industrial landscape. Before reaching Zamudio we will see on our left the church of Santa María and before this will have passed near the tower house of Lezama and next to the baroque shrine of the hermitage of the Christ of the Holy Cross. This type of hermitage shrine used to be built at the entrance of villages so that the visitors would kneel before the cross and demonstrate that they arrive in peace.

Km. 23 Zamudio. As we get closer to Zamudio, the landscape changes. We have arrived at the industrial Bizkaia, where we can notice the proximity to the city of Bilbao.

After passing Zamudio we reach the Pinoa industrial park, cross it, and then cross over a bridge that passes over the busy Txorierri motorway. Turning to the right we will take the path that goes up the mountain, among trees, to later go down a path to the San Antolínneighborhood and notice the urban and industrial landscape of the Technological Park of Zamudio and the towns of Derio and Erandio. The path continues to the BI-3732 road that we will cross to make the final ascent to Mount Avril over the remains of the old “Calzada de losZamudianos.”

Km. 27 – 29.7 Monte Avril and arrival in Bilbao. After a last effort before arriving to the big city, in this mountain we can relax in the recreational area and enjoy the panoramic views of Bilbao.

The route descends through the neighborhood of Begoña until the Basilica of the Virgin of Begoña, patron saint of Bizkaia affectionately known as the “Amatxu” (mother in Basque).

In front of the main entrance, we follow the signs with the scallop symbol of the Way of St. James going down towards the Calzada de Mallona stairs (another essential image of the arrival in Bilbao) and descending its steps to the historic quarters of Bilbao and its famous “Seven Streets”.

Las Calzadas de Mallona stairway flows into the lively Plaza de Unamuno. After freshening up in the fountain, or in one of its bars and terraces, we continue along the streets of La Cruz and Tendería (old street of Santiago) until we find the end of this stage: The cathedral of Santiago, declared by UNESCO as a World Heritage Site along the Way of St. James.

The historic town of Gernika is known for Picasso’s painting “Guernica” and for the “Gernika tree,” a living symbol of the history of the Basque Country.

In addition to the essential visits to the Council Building and the Museum of Peace, this historic village also offers other tourist attractions that are worth visiting such as: The Church of Santa María, thePark of the Peoples of Europe, where you can enjoy sculptures by Eduardo Chillida and Henry Moore. Also recommended is a visit to the GernikaMarket that keeps the tradition of the baserritarras (farmers) alive by bringing their products from their gardens and livestock to the city on Mondays.

Basilica of Begoña: A temple built in the sixteenth century over a primitive hermitage, in honour of the patron saint of Bizkaia. The devotion to the Virgin of Begoña makes the pilgrimage to the basilica of Begoña a tradition.

Calzada de Mallona: The stairs lead from the Basilica of Begoña to the Plaza Unamuno, passing next to Mallona, ​​the town’s first cemetery. In the steps going down we will also find a via crucis.

Gothic Cathedral of Santiago: In addition to its architectural appeal, it should be noted that the Cathedral of Santiago is a key part of the Way of St. James as it passes through Bizkaia. Not only does its name evoke the pilgrim’s final destination, but so do the symbols carved on its doors, decorated with shells and crosses of Santiago to protect the pilgrims who visited it on their way to Santiago.

Bilbao’s Casco Viejo: The historic quarters known as “the seven streets”, and recognized for its gastronomy and commerce. We recommend pilgrims to visit these lively streets to taste the famous “pintxos” typical of Basque gastronomy and immerse themselves in the life and atmosphere of Bilbao.

In Bilbao it is worth stopping at least one day to visit the famous Guggenheim museum, admire the urban transformation of the town and discover the city’s attractions. 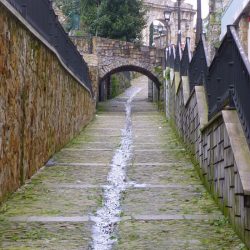 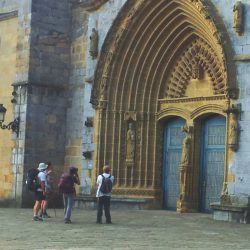 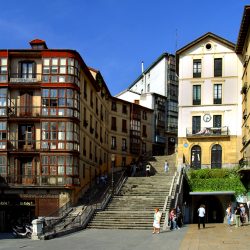